How does gross profit and net income differ?

Gross profit and net income are metrics that show the profitability of a company are derived from a company's income statement. Net income and gross profit have different characteristics that are important to consider before investing.

Gross profit is a company's profit earned after subtracting the costs of producing and selling its products. Gross profit is calculated as shown below:

Revenue is the total amount of money earned by a company for a period. Revenue is sometimes listed as net sales because it may include discounts and deductions from returned merchandise. Revenue is called the top line number since it sits at the top of the income statement.

Cost of goods sold or COGS is the direct costs involved with producing goods. COGS includes both direct labor costs, and direct materials costs used in the production of a company's products.

Gross profit measures how well a company generates profit from their direct labor and direct materials. Some of the costs include:

Net Income is a company's profits or earnings. Net income is also called the bottom line since it's located at the bottom of the income statement.

Below is the income statement for J.C. Penney for 2017 as reported on their 10K annual statement. 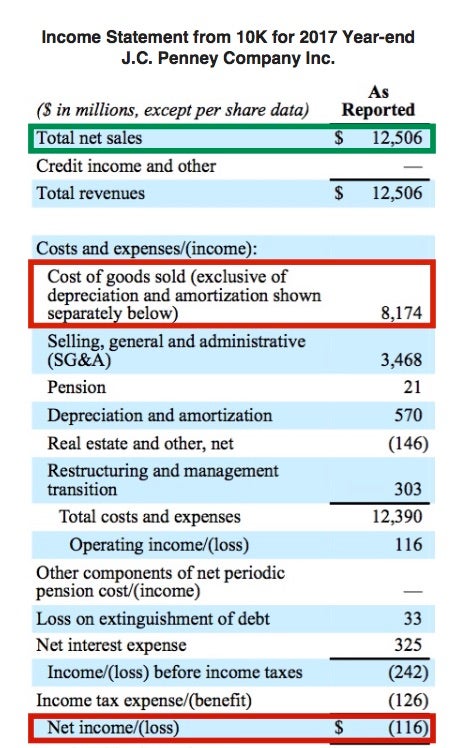 We can see that J.C. Penney earned $4.33 billion in gross profit, but after taking out the remaining expenses including SG&A and the interest cost of their debt, the company suffered a loss of $116 million.

When most people refer to a company's profit, they are not referring to gross profit, but instead are usually referring to net income which is the remainder after expenses, or the net profit.

The example above shows why it's important to analyze a company's financial statements using multiple metrics to determine whether a company is performing well or suffering a loss as in the case of J.C. Penney for 2017.

For more on revenue and net profit with an example using Apple Inc. (AAPL), please read "The Difference Between the Top Line and Bottom Line."