How do the income statement and balance sheet differ?

Companies produce a set of financial statements that reflect their business activities and profitability for each accounting period. The three main financial statements are the balance sheet, income statement, and statement of cash flows. The cash flow statement shows how well a company is managing its cash to fund its operations and any expansion efforts. In this article, we'll examine the differences between the balance sheet and the income statement.

To best analyze the key areas of the balance sheet and what they tell us as investors, we'll look at an example.

Below is Apple's balance sheet, as of the end of the fiscal year for 2017, from their annual 10K statement.

The top section contains the current assets which are short-term assets that are typically used up in less than one year.

Next on the balance sheet are the long-term assets, such as: 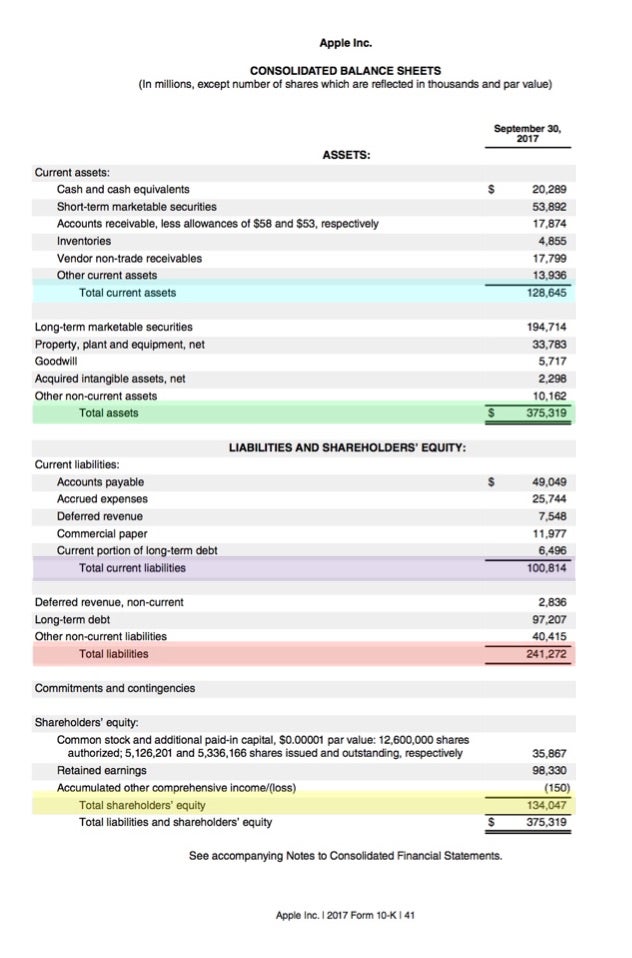 Current liabilities are short-term liabilities for Apple that are due within one year and include:

Not all of the long-term liabilities are broken out for Apple, but they typically include:

Below is the income statement, as of the end of fiscal year for 2017, from J.C. Penney's annual 10K statement.

The top section includes total revenue or sales for the period. 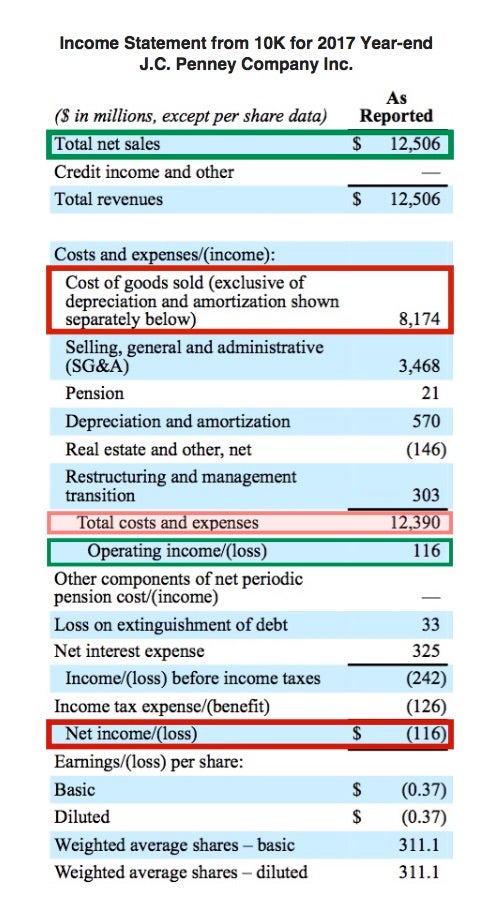 J.C. Penney is a great example of the importance of looking at the complete financial picture. Although $12.5 billion in revenue appears on the surface to be an impressive number, when factoring in the cost of incurring debt, the company took a loss for the year. It's worth noting that comparing the financials of any company works best when compared over multiple periods and against companies within the same industry.

The balance sheet displays what a company owns (assets) and owes (liabilities), as well as long-term investments. Investors scrutinize the balance sheet for indications of how effective a company's management is using its debt and assets to eventually generate revenue that gets carried over to the income statement.

The income statement shows the financial health of a company or whether or not a company is profitable. Both revenue and expenses are monitored closely since it's crucial for management to grow revenue while keeping costs under control. For example, a company's revenue might be growing, but if expenses are rising faster than revenue, the company may eventually incur a loss. Typically, investors and analysts pay close attention to the operating section of the income statement to gauge how efficiently management operates the company.

However, it's safe to say that both statements are scrutinized by investors and analysts since they provide a strong indication of the current health and future prospects of any company.

For a more in-depth look at the differences between these two important financial statements, please read "How Do the P&L Statement and Balance Sheet Differ?"