Gross profit margin shows the percentage of revenue after subtracting the cost of goods sold involved in production. The cost of goods sold is the amount it costs a company to produce the goods or services that it sells. Gross margin shows how well a company generates revenue from the direct costs like direct labor and direct materials involved in producing their products and services.

Gross profit margin is calculated by taking total revenue and subtracting the cost of goods sold. The difference is divided by total revenue. You can multiply the result by 100 since gross margin is typically shown as a percentage.

Below is a portion of the income statement for JC Penney Company Inc. (JCP) as of May 5, 2018. 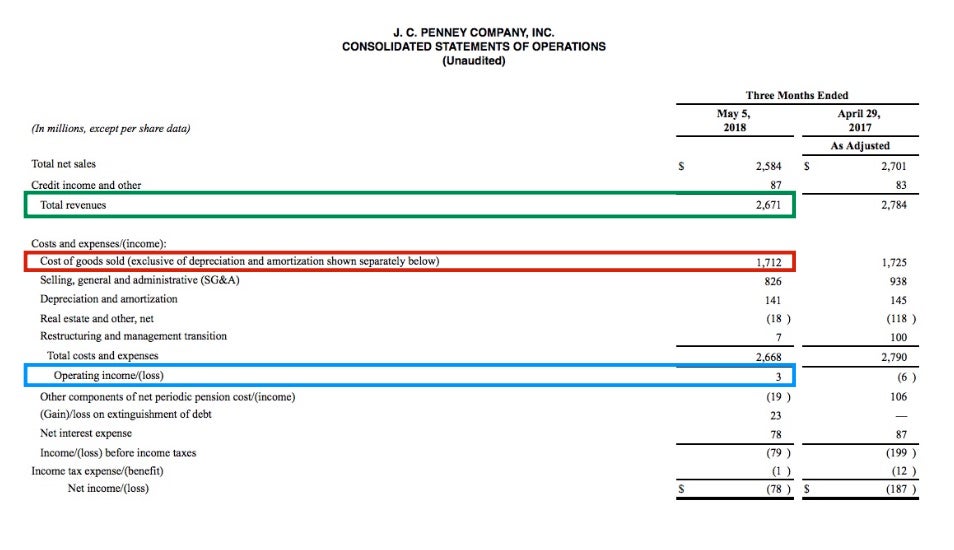 JC Penney earned only $3 million in operating income after earning $2.67 billion in revenue. Although gross profit margin appeared healthy at 38%, after taking out expenses and SG&A, operating profit margin tells a different story. The disparity between the numbers shows the importance of using multiple financial metrics in analyzing the profitability of a company.

Gross profit margin (gross margin) and operating profit margin are both used to determine how well a company's management is generating profits. It's helpful to compare the profit margins over multiple periods and with companies within the same industry. For more on profit margins, please read "What Is Considered a Healthy Operating Profit Margin?"